Trevor Lawrence, Clemson slide past Ohio State, shapeshifting into what was needed to win Fiesta Bowl

Trevor Lawrence, Clemson slide past Ohio State, shapeshifting into what was needed to win Fiesta Bowl

GLENDALE, Ariz. – All 6-foot-6, 230 pounds of Trevor Lawrence was reminded he had just outrun elite Big Ten defenders on his way to the end zone. Where in the name of Kyler Murray had those sort of legs come from?

"I don't know," Clemson's quarterback quipped. "I guess I bought them right before the game."

You don't buy that kind of speed and athleticism. You can afford to hide it when you're winning every game by 40 points.?

That's part of what happened when Lawrence and his No. 3 Clemson teammates did a little bit of shape-shifting Saturday in the Fiesta Bowl College Football Playoff semifinal. They now will face No. 1 LSU for the title Jan. 13.

In the same 60 minutes, Clemson's leading rusher for the season, Travis Etienne, emerged as the game's leading receiver -- three catches for 98 yards, including the eventual game-winner with 1:49 left.?

"That's a crazy stat right there," said Clemson safety Nolan Turner, who effectively ended the game with a key interception.?

Crazy, strange, insane, completely unexpected from a team that rarely had to expend itself the previous 28 consecutive victories. In getting to No. 29, the Tigers were something almost completely different.?

They came from behind twice, posting their biggest comeback since 2011 and fifth-biggest in history (down 16-0). They trailed at halftime for the first time in 15 months. They were out-gained by 99 yards. They were something they haven't had to be for much of this two-year run: resilient.?

Dabo Swinney, as he usually does, put it in perspective. After the game, Clemson's coach said he wrote two things on his play-calling sheet: "quarterback run" and "running back [catching passes]."?

"It is just amazing how it all kind of came together like I hoped it would," Swinney said.?

Frankly, we didn't know this version of the Tigers had it in them because they had never had to show it. Lawrence can run but never did this much in his career, 16 times. Same for Etienne, whose previous receiving high was 52 yards. For the third time in his career, he scored three touchdowns -- two receiving and one rushing.?

"I just think it's kind of funny," linebacker Isaiah Simmons said. "We're defending champs, 29-0. Nobody really respected us. Apparently, we didn't play anyone. Now, I don't think that can be said at all. We finally played someone, as they say.

"Now we're going to roll with that."

The sarcasm was dripping from Simmons' comments. The praise now has to roll in. Any hedge about playing in a soft ACC -- a legitimate gripe -- should be gone. The Tigers rightly enter the national championship game as a 3.5-point dog against LSU's awesome offensive machine. Now ask them if they care.?

Clemson has only eight seniors. Swinney has kept projecting a you-better-get-us-now theme because he says there are 80 -- 80! -- freshmen and sophomores on this squad.?

It's hard to believe this thing may be just getting started. Either way, can we all agree that at this moment Clemson has the pre-eminent college football program in the country?

"We're made of the right stuff," defensive coordinator Brent Venables said. "You know it when you see it. There's a lot that goes on before you ever get to the field whether or not you know you got it."?

But back to Lawrence, whose amazing run around left end cut the Ohio State lead to 16-14 just before halftime. By that time, Ohio State had failed to shore up an encouraging 16-0 lead. And Lawrence did indeed outrun Ohio State linebacker Baron Browning (advertised 40-yard dash time: 4.5 seconds) and freshman defensive end Zach Harrison (4.47 as an edge rusher).

Trevor Lawrence takes the ball 67-yards up the gut for a TD.

That led to the obvious question: What the heck does the tall, lanky, gun-slinging Lawrence run in the 40?

We did. One recruiting site had him at 4.78 coming out of high school. Swinney has been saying since last year's College Football Playoff that he wanted to get Lawrence to take off more. But we never expected this bizarro world where the nation's No. 1 recruit as a quarterback became his team's No. 1 running threat in a national semifinal.?

"Honestly, I saw it the first time Trevor got on campus," Etienne said. "We were kind of in spring ball, and Trevor just took off."

"We can't touch him [in practice], so we can't tell if he's fast or not," Simmons said.

?"This guy [Lawrence] can move, man," Swinney added. "People don't really realize that. That's one of the things that's changed his game, is he's gotten as much confidence in his legs now as he does his arm. He picks his spots, but we don't win the game tonight if we didn't have his legs."

Let's pause here to point out, Ohio State has absolutely nothing to complain about. It blew that 16-0 lead that should have been 23-0 or 28-0 in the first half. But the Buckeyes were 0-for-3 in red zone touchdown opportunities in the first 30 minutes, settling for field goals each time.?

"I just got a bad stinger, so it kind of scared me a little bit," Lawrence said. "I hadn't gotten one in a while and couldn't really move my arm for a second. That's why I laid there. Then just got kind of mad and popped up."

The new life tilted the game back to the Tigers' favor. Clemson scored 21 unanswered points.?

A roughing-the-punter penalty kept a Clemson drive alive in the third quarter. Two plays later, Lawrence hit Etienne for a 53-yard screen that went for a go-ahead touchdown.?

It looked for the world like Ohio State -- down 21-16 at the time -- was robbed in third quarter when corner Jeff Okudah seemed to pry the ball loose from Ross after a catch. Ohio State safety Jordan Fuller then returned it 30 yards for a touchdown that would have put the Buckeyes up.?

But upon review, it was determined Ross didn't have proper possession of the ball. Incomplete pass.

And let's not forget, in the dying seconds, Ohio State's Justin Fields threw his second interception of the game to seal the result. The pick was only his third of the season. It appeared his favorite target Chris Olave ran the wrong route. Turner sealed the win with his interception after being beaten by Olave on Ohio State's last touchdown.?

"It was basically just a miscommunication," Fields said. "So that happens in life and you really can't do anything about it now."

Clemson disrespect? Nah, try disbelief. In a season where they had beaten their opponents by a combined 467 points, they snuck out of town winning by six.?

In a season where blowouts have been the norm, Clemson safety Tanner Muse may have made the biggest play of the season. You won't see it on my most highlight packages, but Muse's desperation sweep of J.K. Dobbins' legs at the end of the first quarter was huge. Muse's tackle stopped Dobbins eight yards short of the end zone. The Buckeyes settled for a field goal to make it 13-0.?

It was, is, and continues to be the little things for these Tigers.?

National champions? For now, defending. Not yet repeating.?

"We never thought it was going to be easy," Simmons said. "It's just hustle plays like that that really shows, as we call it, 'The Eye of the Tiger.' "

Dennis Dodd has covered college football for CBS Sports since it was CBS SportsLine in 1998. He is one of only seven media members to attend all 16 BCS title games and has chronicled conference realignment... Full Bio 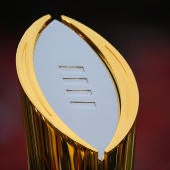